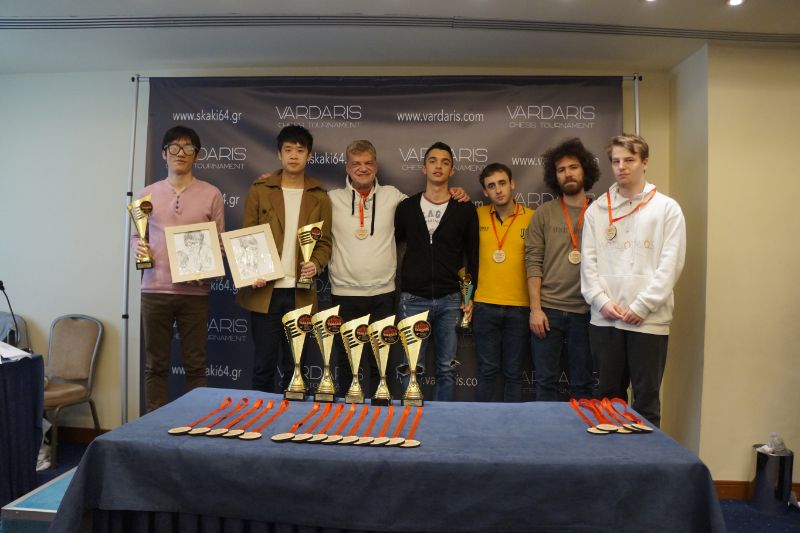 We believe that every "Vardaris" is unique, however the 6th Vardaris was definitely very special, since one day before the start of the tournament, the first incident of coronavirus in Greece was announced, in fact in Thessaloniki. Panic prevailed for two days! All the phones, even the mobile ones of the organizing committee wouldn't stop ringing. There were many participants who canceled, even more who called to ask if the tournament would eventually take place and many who rebroadcast the news from television and radio.

On Tuesday morning we arrived at the Holiday Inn hotel, the playing venue and started the preparations. Late at night everything was ready. Our organization and satisfaction was unimaginable. Of course, no one could imagine the sequel... A day later, we felt that everything was falling apart!

On Thursday the situation had become even more pressing... The pairings were published with a slight delay (at 16.30 instead of 16.00), we had the pleasure to announce the brotherhood with the Chess Club of Xanthi and by announcing the start of the games, we did not really know what we will face after all.

And yet, people were there!!! It is indeed a small organizing miracle, the games started on time and the majority of participants were there!

The 6th Vardaris had started!

In A Group, all participants played on brand new wooden chessboards and 20 electronic chessboards broadcast live the most important games of each round. In all groups, each chess player had a printed card with his/her name, his/her ELO and the flag of his/her country.

On Friday morning, we had organized a guided tour for foreign chess players in the city of Thessaloniki. The White Tower, Thessaloniki seaside, the Castles and Agios Dimitrios Church were our stops...

The impressions of the participants were excellent. A really beautiful 3-hours tour for all the chess players and the attendants who registered.